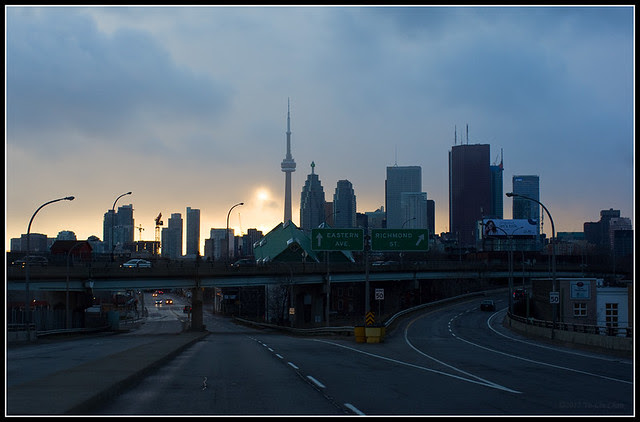 Downtown Toronto in the evening -- NEX-5N & Olympus OM 35mm f2
Couple days ago I was driving towards downtown Toronto on Eastern Avenue, and I commented to my wife on how beautiful and interesting the sun was behind the buildings. I stopped the car (no car was coming behind me) and took a couple of shots.  The picture above is one of the two, but it is not even close to the actual scene.  It was far more brilliant and colourful.  The sensor in the Sony NEX-5N is pretty good, but despite turning on the D-Range, the bright and dark range was still not captured large enough.  I think current technology is already there to increase the dynamic range and colour depth, but manufacturers are not willing to give it to us, at least not as much as we want.  The Canon 1DX sensor should be an indication of the trend that sensor makers are starting to make dynamic range and colour depth as new features, rather than high pixel count, which is encouraging.  I am sure in a few years time, sensors in digital cameras will be able to capture scenes closer to what human eyes can see.
Posted by Lens Bubble at 12:35 PM