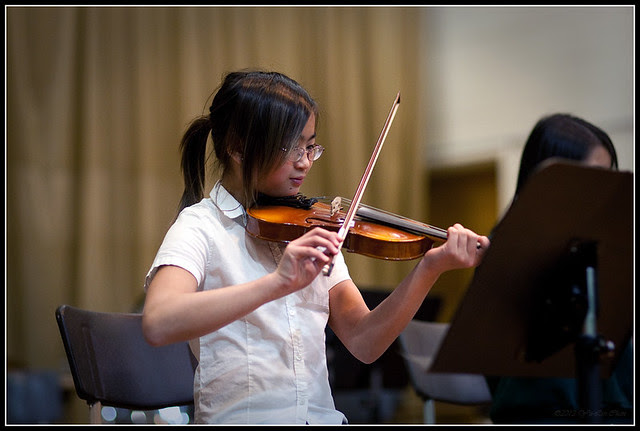 Megan -- Canon 1D Mark III & EF 85mm f1.2L II @ f1.6, ISO 1600
I have been going to my kid's school concerts for about 10 years.  At first, there were mostly film point & shoot cameras brought to the concerts by the parents.  Gradually, more and more digital point & shoots, and in the last couple of years, there are quite a few digital SLRs.  Today, I saw many parents were using their cell phones to photograph/video their kids.  Come to think of it, it's not surprising.  Cameras in cell phones are getting better and better, and some actually rival that of the dedicated entry level digital point & shoots.  The only advantage I can see for the digital cameras, are longer optical zoom ranges on the lenses.

In a few years, entry level point & shoot digital will mostly disappear and be replaced by cell phones.  This may not be a bad thing, as it will force the camera manufacturers to innovate and create better cameras to compete with cell phones.  Even more, Compact System Cameras (EVIL) will become much more popular with parents, as I have already seen at least three of them today, where a year ago, I didn't see any.
Posted by Lens Bubble at 10:20 PM