We are blessed that there are quite a few camera shows in Toronto every year. I try hard not to miss any, although sometimes I intentionally do not go, depending on the gear lust level. The show mostly about old camera gear, which is what I like best. In recent years, price of old stuff has gone up quite a bit, and many vendors are selling their stuff at eBay prices.  Despite all that, sometimes interesting items can be had, even cheaply.

Yesterday was another of these shows. Ever since I got my lathe, I look forward to these shows, as it's the good source of oddball lenses, rangefinders that I could get to hopefully convert to use on digital. I was hoping to find some broken, cheap rangefinders with large aperture lenses, and found exactly none, exept the Kodak Retina IIIc fitted with a slow Schneider-Kreuznach 80mm f4 lens. I am extremely happy as this particular model has been the object of my search for quite some time. The front cell of the lens on this camera has is interchangeable; by replacing the front lens group, one can put on another lens with different focal lengths, like a 80mm, or 35mm. I have a Rodenstock Heligon 90mm f4, which can be used with this camera (or the lens on this camera), which I have been dying to try out. Now all I have to do is to remove the lens from the camera and make it work on my Sony A7. 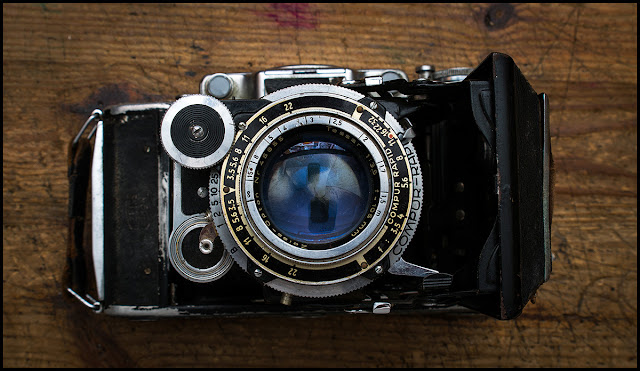 Another find from the camera show was a Zeiss Ikon folder with an Opton Tessar 105mm f3.5 lens.  I really hesitated on this one because it was quite expensive (for me) but the lens proved to be irresistable to my already weak will power so I gave in to my temptation. The camera is not really in working condition, but the lens is in beautiful shape, which is primarily what I am after. I have an Opton 75mm f3.5 which I really love, and I don't have a Zeiss Tessar in the 105mm focal length. It will be interesting to compare this one with the Ross London Xpres 105mm f3.8. 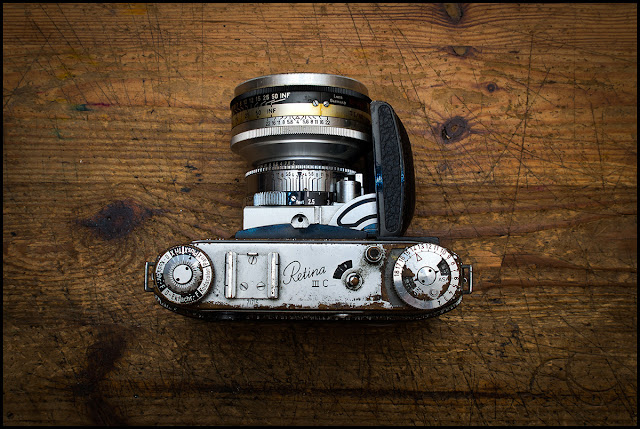 Very beat-up Retina IIIc with Schneider Longar 80mm f4. Note the rust but the lens is in very good shape. 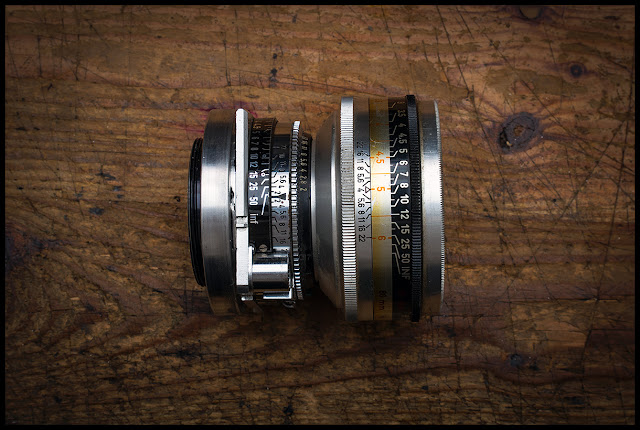 Converted. The lens will be mounted on a 12-17mm focus helicoid. The lens itself has focus mechanism, so this lens can focus very close by using both focus.

Best bargain of the day was a box of M42 2x teleconverters for a $1 each. No, I didn't buy these to use for taking pictures.  I bought them to use the mount for lens conversion.  I have already used two of them: one for the lens above, and the other is for the Voigtlander Talon 100mm f2.8 projection lens.

Overall, I think it was a quite a productive day. Enough toys to experiment until the next show in March :)
Posted by Lens Bubble at 10:30 PM 3 comments:

One of the nice things about larger format lenses like the Ross London Xpres 105mm f3.8, is that their flange distance is often longer than most SLR camera mounts, and this makes them adaptable on DSLRs, even on Nikon cameras which is usually the least adaptable mount of all D/SLR cameras. This particular lens, having a very long flange, is even usable with the Vivitar Macro 2x Teleconverter helicoid.  I have a number of these Vivitar macro teleconverters, and I used one of them for the Nikon mount.  Even with the Vivitar focus helicoid, a 10mm spacer is required to make the lens focus to infinity.

This lens has one nice feature on its shutter: T setting. This setting allows you to trip the shutter and it stays open until the shutter is tripped again. This makes it unnecessary to remove the shutter blades in the lens, but at the same time, the shutter is easy to trip so often I have to re-cock the shutter and make it open again before use. A small inconvenience I can live with. 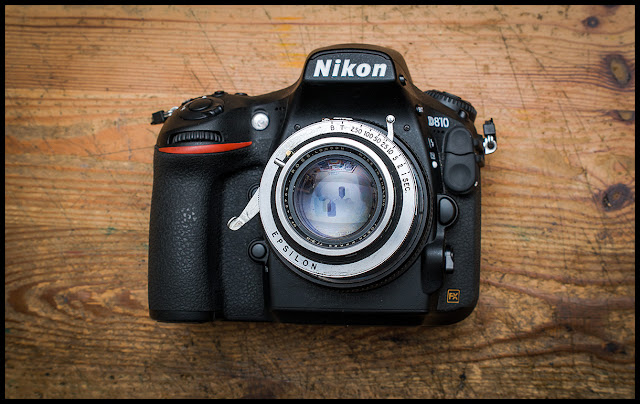 I am not a big fan of using adapted lenses on DSLRs, having done that with the Canon for many years. They are nowhere as convenient as using an EVF on mirrorless cameras. But the Nikon D810 has a very nice optical viewfinder, and I find that I don't have much trouble getting critical focus, even with slower lenses. The non-swivel rear screen is still a big negative for some low angle shots. That said, I kind of enjoy using the D810 with some of the manual focus lenses. Aside from the nice viewfinder, the image quality is the biggest attraction. 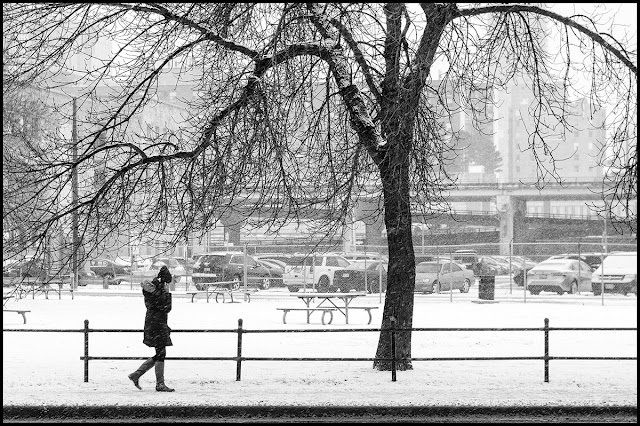 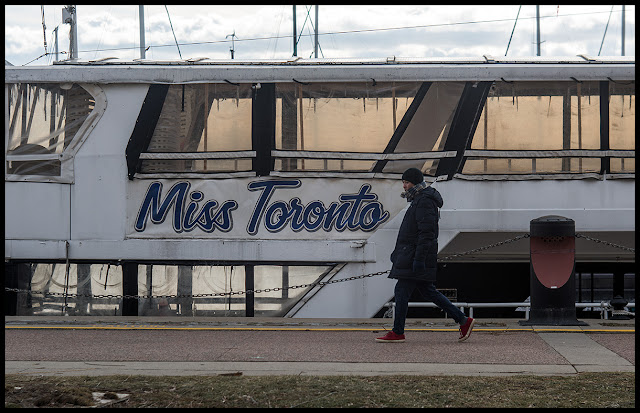 The Xpres 105mm f3.8 lens works really well with the D810, despite the high density sensor. So far, I am really, really liking this lens and how it renders pictures, even though I have only used it a few times. The bokeh is especially smooth and beautiful, but the lens is also quite sharp.  One thing that I have noticed, and that usually does not happen with the Sony A7, is I get more blurry pictures with the D810, even though I set the minimum shutter speed to 1/125s. This camera requires a much higher shutter speed to get sharp pictures.

I am looking forward to using this lens more, especially in the spring when we have more colours to fill the camera sensor. 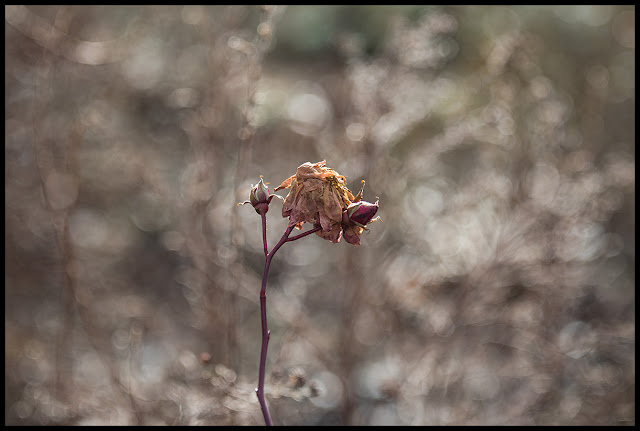 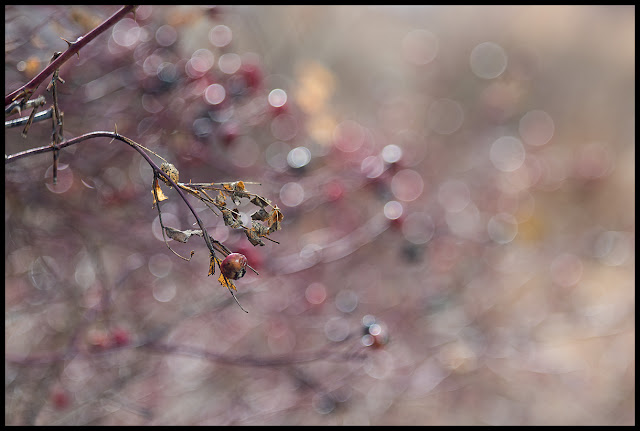 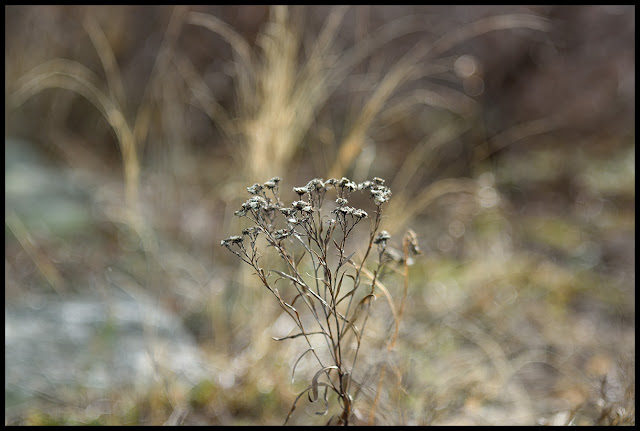 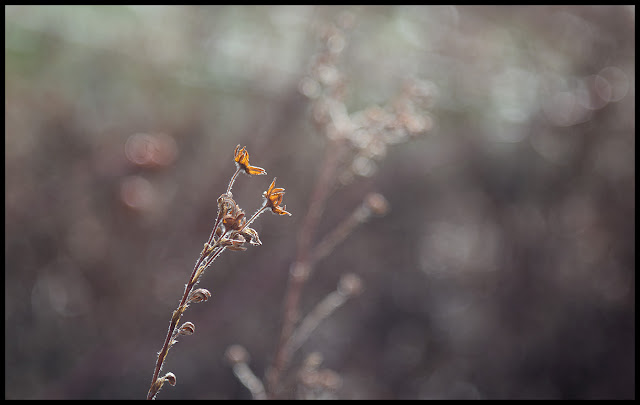 Bokeh Samples - Xpres 105mm f3.8 and Nikon D810. This pictures need to be viewed at large size to appreciate the details. 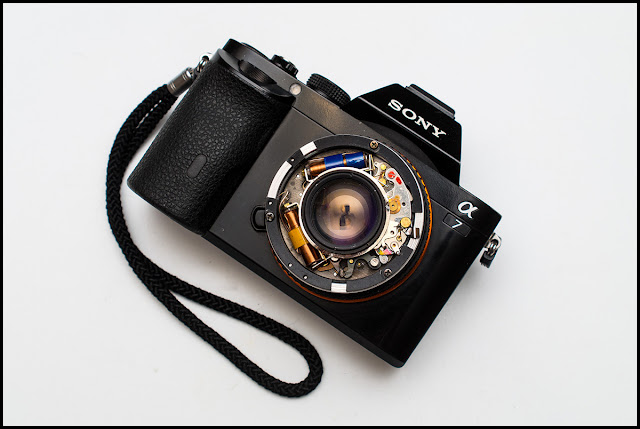 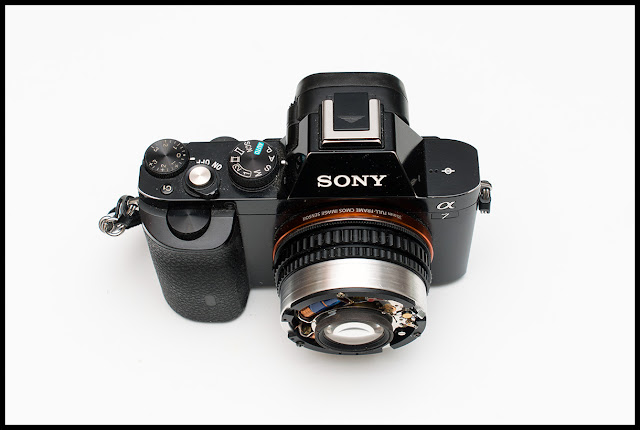 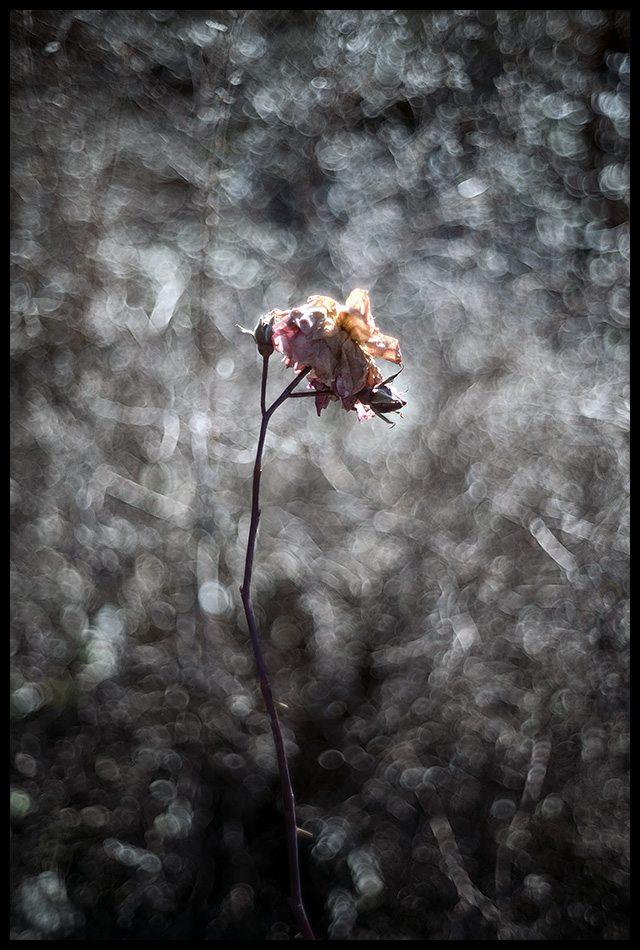 2016 has seen the fewest blog entries since I started blogging a few years ago, but at the same time, I took a record number of pictures in the same year, mostly with my Sony A7.

Looking back, I did not spend any money on digital camera bodies in 2016. For some reason, I didn't have the urge to upgrade the cameras like I did in previous years.  Perhaps I have come to the realization that my Sony A7, Nikon D810 and the Olympus EM5 are still great cameras. The Nikon 1V I got was given to me in exchange of some work I did for a friend, and I really do not like that camera at all, for manual focus lenses.  Nikon has castrated the very feature I need, mainly, auto exposure for manual focus lenses, and I can't see myself using manual exposure for every freaking frame I take.  It's just not happening.  That's the reason I have not even bought any adapters for it. Really don't know what to do with the camera.  A shame really, as it has so much potential for small format lenses like D-Mount, C-Mount, and half frame lenses.  As an AF camera, it's quite nice, dynamic range of the sensor not withstanding.

The best thing I did in 2016, was the purchase of the micro lathe.  It has been only a short time, and the lathe is not perfect, but I got a taste of what I can do with such a machine, and I am hooked.  I really look forward to adapting more lenses with it.  In fact, I have a plan which I will talk about in another post :)

Last year also saw me amassed a large number of non-standard lenses and (mostly dead) rangefinders. My goal was to buy enough of these things for me to practice on, to make myself a more skilled lathe operator. So far, I have done about a dozen conversions, mostly on slower rangefinder lenses or on lenses that are already manually converted but with less than satisfactory results. The only thing that slows me down is the lack of time I have available. I think for simple conversions, I can do a pretty good job now.

I fully realized that my blog has become more niche and covers mostly non-standard lenses.  This may turn off some readers who may expect me to cover conventional mount lenses, but I find it in my interest to discover and try out these gems.  Sorry if this is not your cup of tea.  There are so many of these lenses out there and as many people don't realize they can use them on digital cameras.  If I can provide enough information to make some of these lenses live a second life, my goal is accomplished.

Photographically, 2016 was not a bad year for me.  No, my pictures have not improved,  but I enjoy taking them nonetheless.  Hopefully 2017 will be even better! 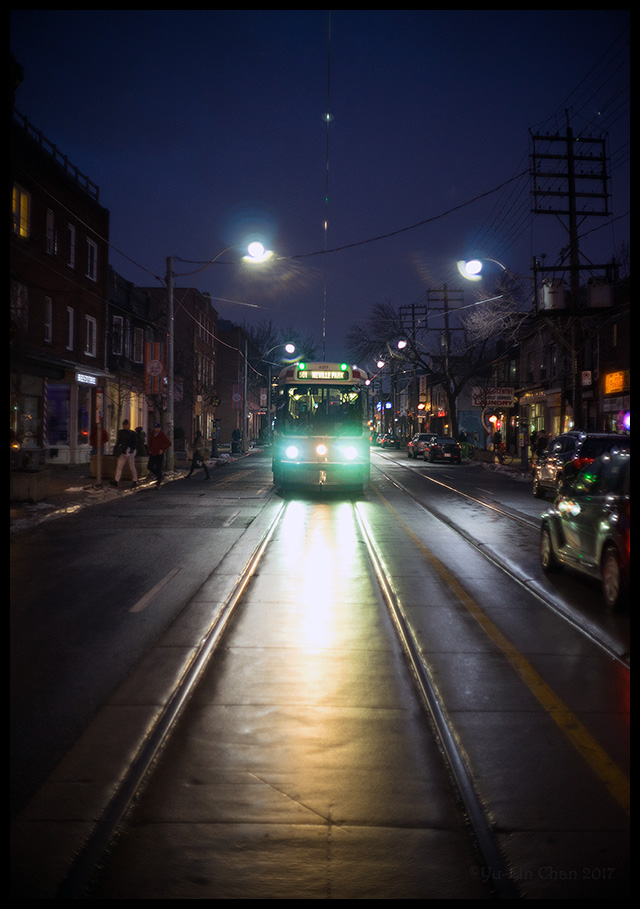 I got this Vivitar 35ES rangefinder, rumored to be the same camera as the Minolta Hi-Matic S7 II, to see how hard it is to convert the lens which has Automatic aperture control to be used on the Sony A7.  The aperture is not manually adjustable, obviously, but it is not controlled by a geared motor like modern lenses are.  The aperture is still mechanical and I was able to link the aperture to the ISO Shutter Speed ring on the lens. Not perfect as there is no indexing, but it allows the aperture to be controlled.

Tried it out today and I am very happy with how it renders images.  More to come. 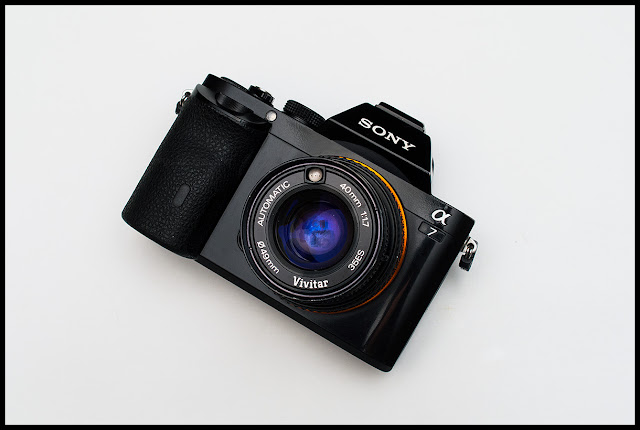 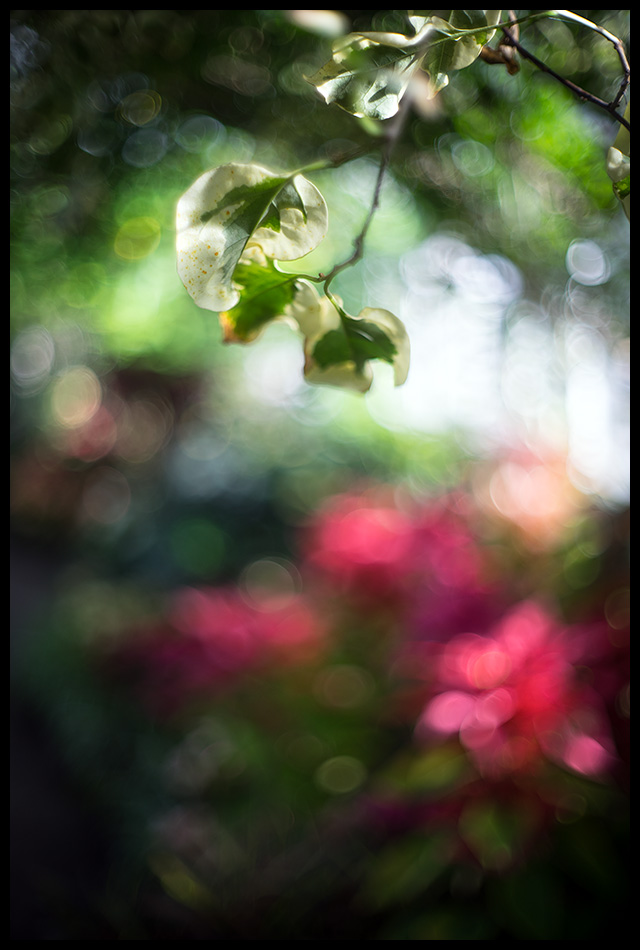