So, I went visit an old friend, Henry's Outlet Centre Plus today, on my day off. The Outlet store re-opened today in Mississauga. It's a nice size store about 3 times larger than the old one. Very spacious and open with high ceiling. It does indeed feel less compressed, compared to the old place. Lots of stuff, include new items which were missing from the old store. Only about half of the original sale staff made it to the new store.

Naturally, I could not restrain myself, and bought a whole bunch of lenses. Including one that had been on the shelf in the old store for many years -- the Tokina AT-X 80-200mm f2.8 Contax mount. I was waiting for it to drop to about a $100, but alas, it never did. Today, it was $25! Not that I needed this lens, but I was green with envy when my friend Tony, who bought the same lens in Nikon mount around 1983, for over $700, and that was dollars in 1983! Being a poor student, I could only salivate at an expensive lens like this. Well, 27 years later, I have my copy for $25, in like new condition. LOL!

There is one more lens I bought today at the Outlet store. Last time I wrote about the Bushnell 70-220mm f3.5 lens, I was thinking who made that lens, because Bushnell, like many companies in its time, did not really make their own lens (although its parent, Bausch & Lomb, did make cine lenses and other optics). Well, three weeks later, I found its step brother in M42 mount -- the Soligor 70-220mm f3.5 C/D. Soligor C/D lenses are premium category of lenses, like the Vivitar Series-1. This indicates that the 70-220mm f3.5 should be a pretty good lens. Haven't used this Soligor version yet, but I expect identical performance from both lenses. 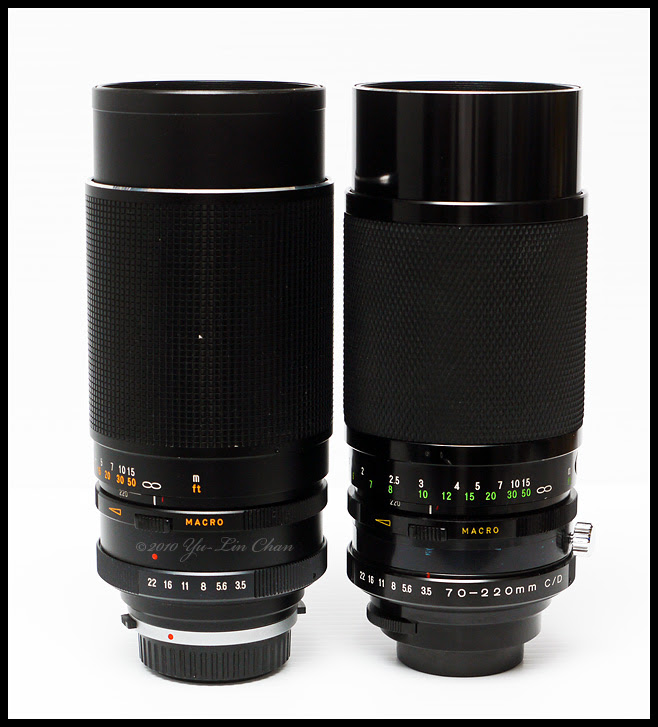