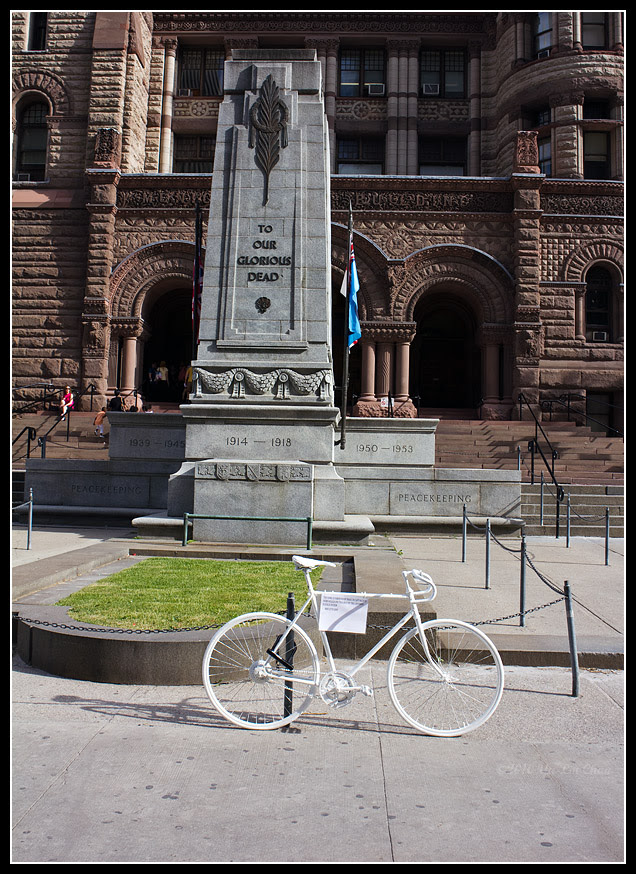 A recent court ruling that dropped all charges against former politician Michael Bryant, who hit and killed Darcy Allan Sheppard on August of 2009, sparked an outcry among many cyclists. As you can see from the picture above, a ghost bike has been placed in front of the old Toronto City Hall to protest the ruling. The writing on the piece of paper says "This bike is a reminder that cyclist rights were killed on this spot by the Ontario justice system - May 25, 2010."

As someone who rides a bike to work everyday, including winter days, I have my own experiences on the behaviours of both drivers and cyclists. Some cyclist are very aggressive riders that zoom through open streetcar doors, red lights, between cars, etc, with little safety regard to himself/herself as well as others. Of course, there are car drivers who just should not be driving vehicles at all. They drive their car like they own the road, but most are just careless -- making right turns without signal or checking blind spots, opening car doors without checking for bikes coming from behind, driving too close to the curb without checking bicycles beside them.

My personal view on this matter is that both drivers and cyclists need to be alert and practice restrain. Some courtesy on the road will go a long way toward a safer environment for cyclists and cars alike. Cyclists should obey traffic signs and signals just like cars drivers (should) do. The bicycle lanes on the few Toronto streets help tremendously for safer riding, but they can not be implemented on most streets as they are extremely busy streets or lane reduction to make way for a bike lane is just not possible.

So, take it easy. Be alert. If you bike, wear helmets, and make sure your bike is tuned up and in good shape, especially with good brakes, and have safety flashers for both front and rear. If you drive, look out for cyclists, especially in the winter when you don't expect people to bike. Check your blind spots before making a turn, and look before opening the driver's door.
Posted by Lens Bubble at 7:09 AM

Email ThisBlogThis!Share to TwitterShare to FacebookShare to Pinterest
Labels: Cycling