The Sony 16-50mm f3.5-5.6 lens has two very desirable features: wide angle at 24mm (35mm full frame equivalent), and it's a pancake zoom, thus very small.  I am not a lens snob, but I don't have fondness for kit lenses that come with cameras.  The very worse ones that I have used, unfortunately, are Sony E-mount kit lenses.  They are relatively sharp, but the distortion is horrendous.  This include the 16-50mm f3.5-5.6.

The 16-50mm kit lens has an electric zoom, which I don't care for. I very much prefer mechanical zooms. The zoom action is actually quite noisy and not very precise. It's great for video, but not for still photography in my opinion.  In terms of build quality, I think the 18-55mm kit lens is better.  The 16-50mm lens feels more plastic and cheap, not to mention is has a weird 40.5mm filter thread. Why not make it 49mm like the others?  The lens is not exactly small in diameter.

My particular copy of the 16-50mm kit lens is not very sharp at the wide end of 16mm, even at f8.  At longer focal lengths, it performs much better. What really turns me off, though, is the barrel distortion at 16mm.  Have a look at the picture below:

On the left, is a thumb nail from the RAW file, and on the right is the jpeg version (I shot RAW+JPEG in B&W).  Just look at how bad the native distortion is.  Yes, correction is easy, and Lightroom 4.3 has a lens profile for it, but after correction, the lens is no longer 16mm wide, as you can see in the picture above in the jpeg version.

The other major defect is how severe the vignetting is at 16mm.  You can see the (very) dark corners in the RAW picture above.  Perhaps that's why the lens doses not come with a hood, as a hood might make it worse. Again, it's easy to correct, but it tells you how much compromise was designed into this lens.

In actual use, if you don't shoot pictures with straight lines, it's not so bad. At 16mm f8, it's almost as good as the 16mm f2.8 pancake at f8, though the 16mm f2.8 is slightly sharper at the center. The wider angle of 24mm equivlant is definitely a plus, but if you are going to use this lens as your everyday, primary lens, you may be disappointed, especially if you care about image quality. 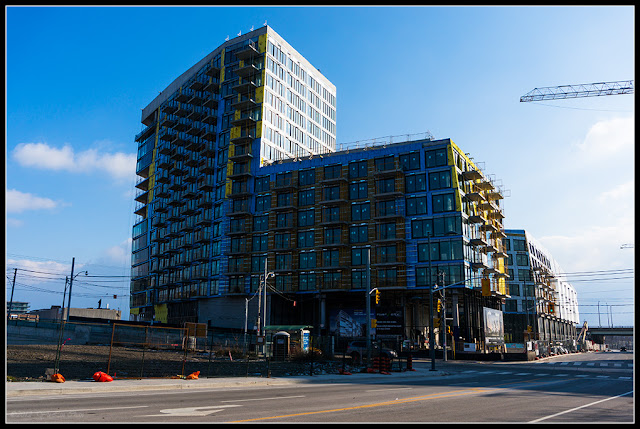 In Part IV, I will have more to say about this lens.
Posted by Lens Bubble at 9:42 AM