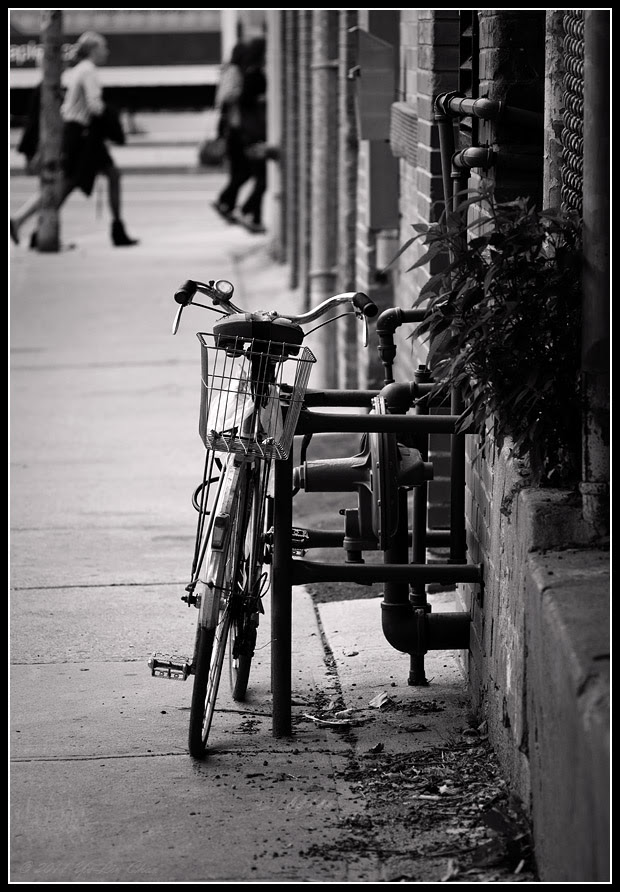 Bicycle -- NEX-5 & Voigtlander Super-Dynarex 135mm f4 @ f4.
Voigtlander and Kodak were the two major camera makers that used the DKL mount.  DKL was not really that common and therefore there aren't that many DKL mount lenses out there.  Most of them were made by either Voigtlander or Schneider-Kreuznach.  I have small collection of DKL lenses, but unfortunately, all except the Schnieder-Kreuznach 50mm f1.9 have very long minimum focus distance.  We complain about this on rangefinder lenses, like the Voigtlander Nokton 40mm f1.7 with MFD of 0.7m.  Both the Schneider 135mm f4 and the Voigtlander 135mm f4 have MFD of 4 meters (15 ft)!  So, any kind of close up is out of the question without extension tubes or close-up filters.

The Super-Dynarex 135mm f4 is a very nicely made lens.  The one I have is in amazing shape and very clean inside and out.  Being such an old lens, it's remarkably usable optically, even at f4.  Due to the very long MFD, this is the second time I actually used the lens, after acquiring it for a while.  I find long lenses like 135mm or 200mm, very hard to focus on the G1 or NEX-5. If I magnify the image, it shakes too much due to small angle of view, add to the problem is the lack of a view finder on the NEX-5, which makes manual focus even harder.

I don't see myself using this lens or the Schneider Telexenar 135mm f4 much.  I don't like lenses with very long minimum focus distance.
Posted by Lens Bubble at 8:40 PM