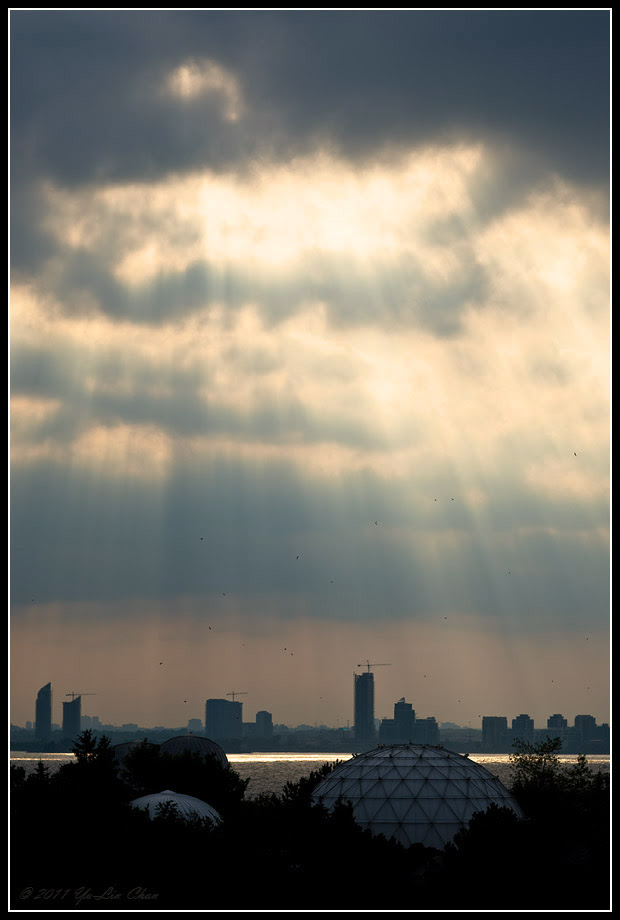 Lights -- Canon 1D Mark III & EF 85mm f1.2. Those black dots are birds, not dust!
Since I got the 1D III (the second time), I have had used it a few times. I am quite happy with it so far and it seems to be a lot more reliable (in terms of focusing) camera than the Mark III I bought originally.  Focus seems to be very accurate, with the exception of the manual focus is slightly out of whack, possibly due to the shims missing on the focusing screen.  But I really do not use manual focus lenses on the Mark III.  Looking at the ISO 1600 and even 3200 pictures, I am happy to say that it's very clean.  Much better than those from the NEX-5.

Now that we know what to expect from the NEX-5N, which has amazing low light capabilities.  If this camera has a built-in EVF, I would have bought one today, but adding the EVF to the NEX-5N is almost the same price as the NEX-7!  Sony should really make a NEX-6: a camera with NEX-7 body and NEX-5N sensor.  As optimistic as I am, I don't think the sensor in the NEX-7 will be anywhere close to be as good as the one in NEX-5N.

Originally, I wanted a full frame body, and my eye was set on the 5D II, and I will have something like 1D III, 5D II and NEX-5.  But I have really been spoiled by the NEX-5.  I took it with me everywhere I went and took a lot of pictures with it.  You can't beat the portability of the NEX bodies.  Now that the NEX-7 will be out in a couple of months, and it almost has everything I want in an EVIL camera, except the sensor, and unfortunately, it not cheap.  If I buy the NEX-7, I will have no funds for the 5D II.  On the other hand, if I buy a 5D II, I can probably squeeze out enough money to upgrade to the NEX-5N.  And then there is the 50mm f1.8 OIS that I really want too!  Now you can see why I am slowly going insane!
Posted by Lens Bubble at 6:52 PM