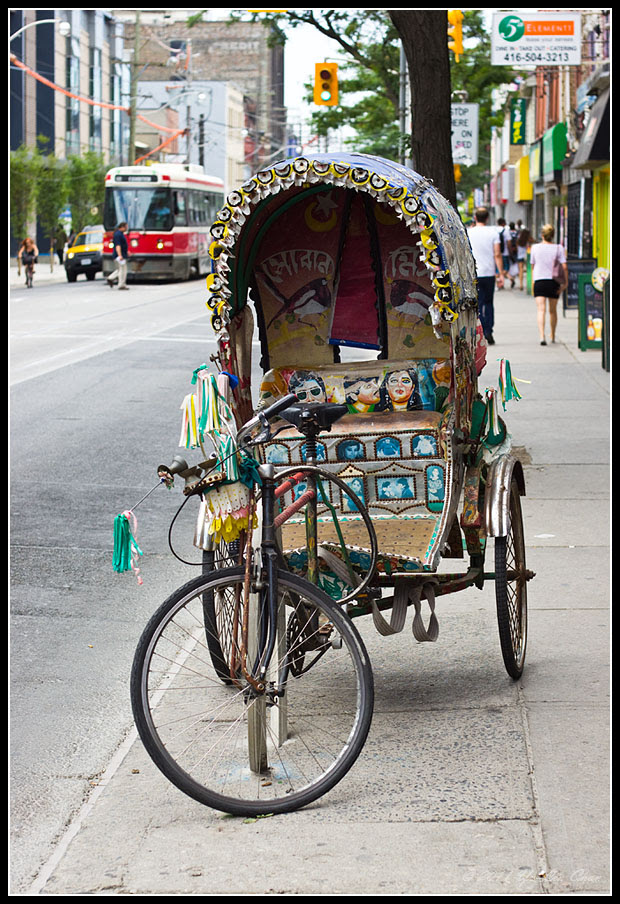 Trike on Queen -- NEX-5 & Mamiya-Sekor 55mm f1.4.
Since I started building my first bicycle with Dillon, I have spent way too much time on bicycles.  We built another one for Dillon, also a single speed, on a cheap Norco frame, but he likes it.  Meanwhile, I got rid of my Marin Larkspur and the De Vinci Olso hybrids that I have had for a few years.  They are good bikes but I just hate to clean chains, cranks, brakes, etc, after the rain or snow.  With a single speed bike, I have much less to worry about.

On Saturday, I bought a used 2009 model Jamis Sputnik track bike (single speed/fixed gear).  Very light with carbon fiber fork.  Easy to ride with comfortable gear ratio.  I tested it out with the one I built, which has a very high gear ratio as that's the ratio I normal ride with my other bikes.  The carbon fiber fork feels a bit weird on bumpy rides when it flexes.  The Sputnik is so light that I could ride it at a very fast speed with hardly any effort.  But, I preferred my cheap bike.  It's heavier, but more balanced.  The steel frame and forks are solid and hardly makes a noise going over bumps, and I could go really fast without peddling like mad.  For long distance ride, though, the Sputnik wins.  For my riding distance, which is 6 KM one way, I preferred my cheaper bike.  Gives me a better workout.
Posted by Lens Bubble at 9:32 PM