I had the GF1 for only a very short time.  I bought it thinking it's a nice small camera that would replace my trusty G1, but alas, it didn't turn out the way I expected.  The GF1 is actually quite a nice camera, and very well built, but I find shooting with it was very awkward.  Consequently, I sold it.

Compared to the GF1, the NEX-5 is much easier to hold due to the larger grip, despite being smaller than the GF1.  Although I don't use the tilt or swivel screen much, the NEX-5's screen can be tilted up or down, useful for some occasions, whereas the GF1's screen is fixed in place.

I guess the biggest difference, this applies to the G1 as well, is the larger sensor which gives a wider angle for the same lens mounted to the body.  With a 16mm f2.8 pancake, I have a nice small 24mm f2.8 equivalent lens on the NEX, but to get this kind of wide angle, the only option is the 7-14mm f4, if you need auto focus.  Panasonic does not make a wide angle 24mm equivalent prime.

Performance -- for the very short time I have used the NEX-5, I find it much slower overall.  Focus is slower, view to shoot time (pressing the shutter to shoot when you are viewing a picture you have just taken) is slower.   The G1/GF1 has noticeably faster focus.  Also, the live-view on the NEX seems to wobble, not really sure if it's my camera, or that's the way it is designed.

Image Quality.  At high ISO 800 and over, the Sony NEX is a little better, on par with the Canon T2i/7D. At base ISO, both the Sony and the Panasonic are very clean.  I like the colour of the Panasonic a bit more then the NEX, but then again, the last two days has been gloomy and snowy, which doesn't really show much of the colour from the NEX.  We will see as I use the NEX more.

One thing that I miss on the NEX is the gorgeous viewfinder of the G1, which makes manual focus a joy.  Hopefully, Sony will release an optional EVF for the NEX bodies. 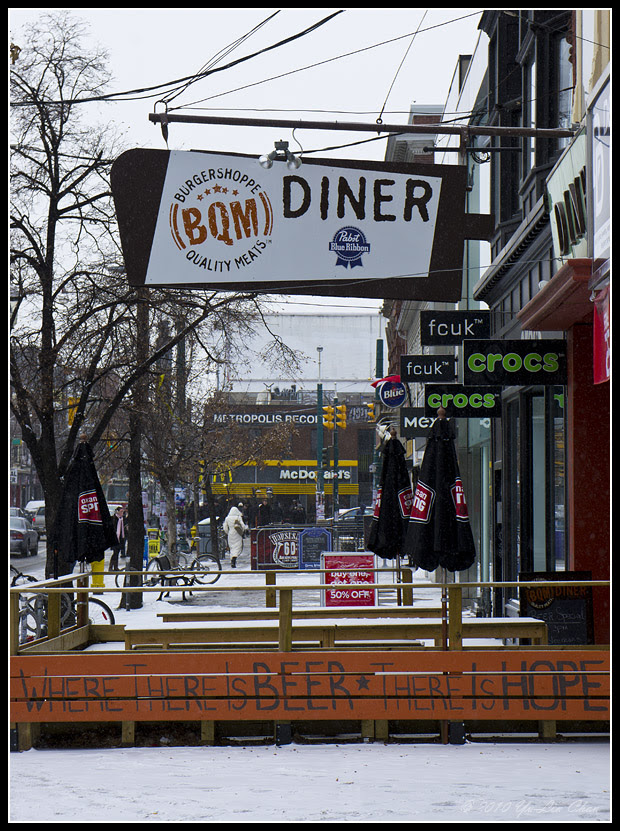