OT: Getting Shafted in Car Service

When it comes to car services, I am always a little apprehensive.  There is this nagging feeling inside me that tells me the dealer is screwing me with the price/services.  In fact, at times, i feel like a piece of meat on the chopping block.  But, what can I do?  If I need to service the car, I have to do it.  I don't know any mechanics personally, so the service is always done at the dealership.

It was a real eye opener yesterday.

A bit of history before we begin: I have been servicing my Toyota at the same dealer ship since the mid 90s after I got my first car, the Cressida (a great car, by the way.  It was the grand daddy of the Lexus).  I bought my first new van from them too, in 2001 due to the growing family.  So, you would think that for such a loyal customer, I would get some respect/better deals in service, no?  Let me give one example before we get back into story.

In early spring, the rear door handle stopped working.  I could hear the cable snapped inside.  Unlike a car, where there is a cable to release the trunk, the rear door handle is the only way to open it.  It was a real inconvenience, so I took it to my dealer and get it fixed.  They first quoted me $150 to fix, but needed to be confirmed by the technician.  Couple hours later, I got a call and it would cost $350.  Now, that's ridiculous.  I told them not to fix it.  Few months later, I couldn't stand not being able to use the trunk, so I went back to them,  and what do you know, they gave me a different quote, and was eventually fixed for $215.  Same problem same service rep, with a big price difference.  My suspicion that the dealer is screwing me deepens.  I swore not to go back there.

OK, back to yesterday's experience.

On Thursday, I drove to work instead of biking, because my wife was a bit late.  When I came back to the car in the parking garage, there was a blanket of shattered glass on the floor -- Some crack-head broke my driver's side window to steal the GPS inside. 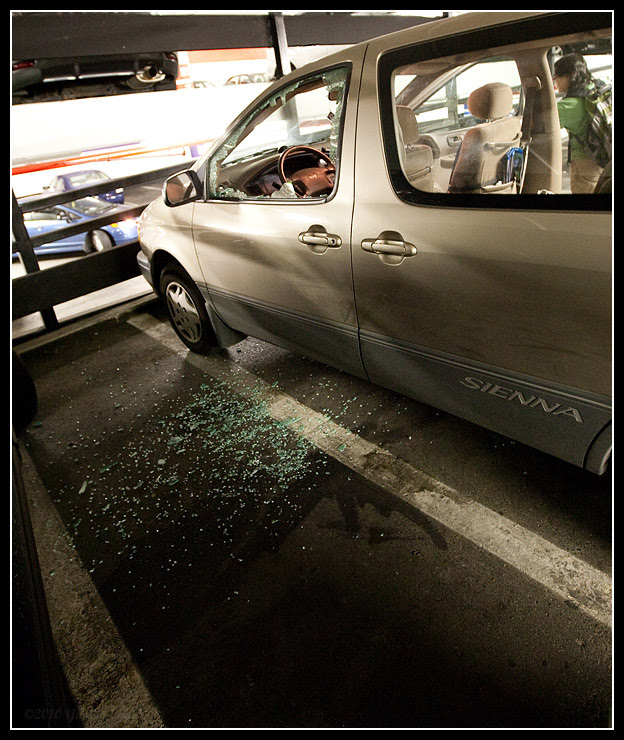 Shattered -- for a cheap GPS. The car was parked inside a supervised Green P garage.
Anyways, I need to get the window glass replaced ASAP so the next morning (yesterday), against my promise, I drove back to my dealership (on Queen & DVP).  They quoted a Toyota glass would cost $400, plus 1.5 hours of labour ($160); an after market glass is $250, plus labour.  So I went for the after market option.

After I went back to work, I called Speedy Glass, and was given a quote of $258 to place the window with genuine Toyota glass, and that's including labour!  Upon hearing that my insurance does not cover the replacement, he gave me an even better deal of under $190, including labour.  Needless to say, I was shocked by the price difference!

What follows was a few calls back and forth with the Toyota dealer.  Their excuse? The parts manager said that's what the supplier quoted him, but said he would call other suppliers.  The final price was $277, including labour, for an after market glass.  I went for it, since the weather has been rainy for the last few days and I was already caught in the rain on Thursday with no glass window.

What have I learned?

The dealership will screw you and scam you any chance they get, regardless of how loyal you are.  Since my van is out of warranty, I will not be using their service again, unless I can't get my van fixed by independent technicians.  This will be tough for me, because they are just so %@#$ conveniently located.  I will have to go out of my way to get services for my van from now on.  Also, call around and ask what others charge before taking your car in.
Posted by Lens Bubble at 12:00 PM

Email ThisBlogThis!Share to TwitterShare to FacebookShare to Pinterest
Labels: Off Topic