Before 1996, Ontario did not allow woman to go topless in public, and Gwen Jacob changed all that.  Gwen Jacob was a University of Waterloo student and was frustrated by the fact that men can go topless in public in Ontario, but women can not.  Consequently, she walked across her campus without top, and then did it again on a downtown street.  She was consequently charged with indecent exposure.  With many protests, the court later overturned the charges and today, if you are a woman, you can to topless in Ontario without worrying about getting arrested.

Why bring up such old news, you may ask.  Well, in Toronto at least, you can sometimes see female go topless in public, in what seems like news reporting.  Yesterday, I encountered such a situation.  I took a few pictures, but the one from the front is blurred.  I think you can guess why!

So what do I think of this?  I believe it's anyone's freedom to take off his/her shirt if she/he feels like it.  From what I can see, most people are not bothered by it, although you can see men snickering at the sight, and some women looked surprised, but no one said anything, or look disgusted. I guess you can say it's freedom of expression! 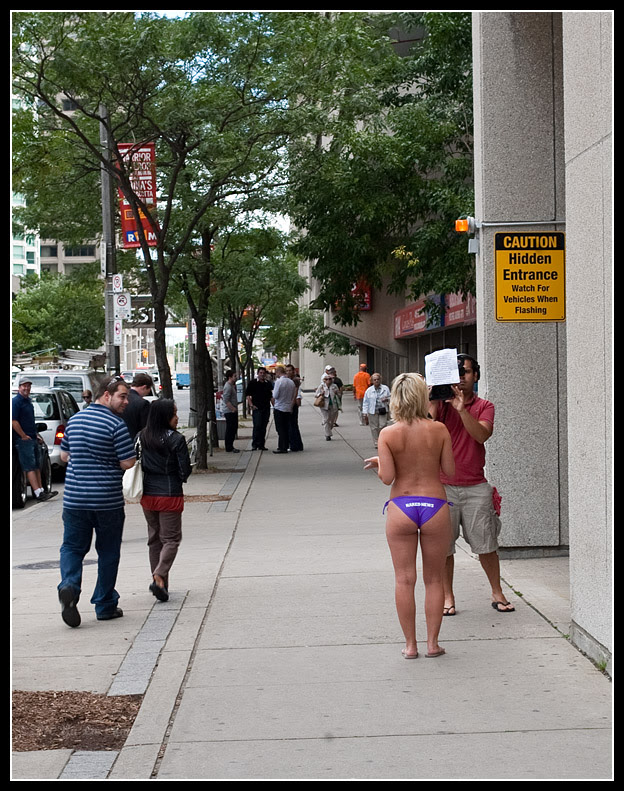