Lens hoods are like a bike helmet.  I put it on when going out shooting (or riding). Hoods serve two very important purposes: 1) it protects the front element of the lens and most importantly for old lenses, 2) it reduces flare and improves contrast.  Shooting without hood is like running naked in public; you will (may) get unexpected exposures :)

Below are two shots taken without, and with a hood.  See for yourself: With or without hood. Taken with a Ross Xpress 5 inch f4 at f4

If you have been using really old lenses, no doubt you will notice some of the lenses become a bit hazy, either due to the microscopic dusts settling inside, or the coating of the lens is starting to disintegrate. This hazy effect makes the lens even more susceptible to flare and stray lights, making pictures look like they were taken in the fog.  Even clean old lenses need proper hoods to bring out the best quality they can provide.

Most modern lenses have dedicated lens hoods that only fit a particular lens.  Older lenses had screw-in mount, making them more universal, and in the good old days, lenses usually accepted filter and hoods with a series-6, series-7, or series-8 standard size filters/hoods.  Most really old large/medium format lenses do not have dedicated hoods and even if they did, after decades of changing hands, they usually would be sold by themselves, naked without hoods.

So where do you get hoods for the old lenses?  Extension tubes, of course :)

I have more tubes than I need for my helicoids, and the rest are used as lens hood. The beauty of this, is that you can add/remove sections for the length that you need. For very long lenses, you may need a hood more than a foot long. But, there is one fatal flaw with extension tubes as lens hood: the lens would vignette badly if the hood is very long, because the diameter of the tube is not large enough.  Hoods should be as large in diameter as possible to avoid vignetting.  Extension tubes are better than nothing. It's usable and useful in most cases but not ideal. I am still searching for a good alternative, and am considering using large black PVC pipes. In the meantime, extension tubes are what I am using at the moment.

Getting hoods for the old lenses is easier than putting them on, because many of these lenses have very little space in the front to mount them. Almost exclusively, I use black electrical tapes to hold them in place. In fact, I bought a half dozen electrical tapes for this purpose. It's string enough and is easy to remove without leaving any residual.  Sometimes it can even be reused.

For smaller lenses, it's a lot more tricky to find the hood that would fit.  I found that parts from old broken lenses that hold the lens rear elements together are usually good as lens hoods. They are usually too short, but they can be taped together using electrical tape.  Below is an example that I used on the Aldis lens. It looks rather homely, but is very effective. 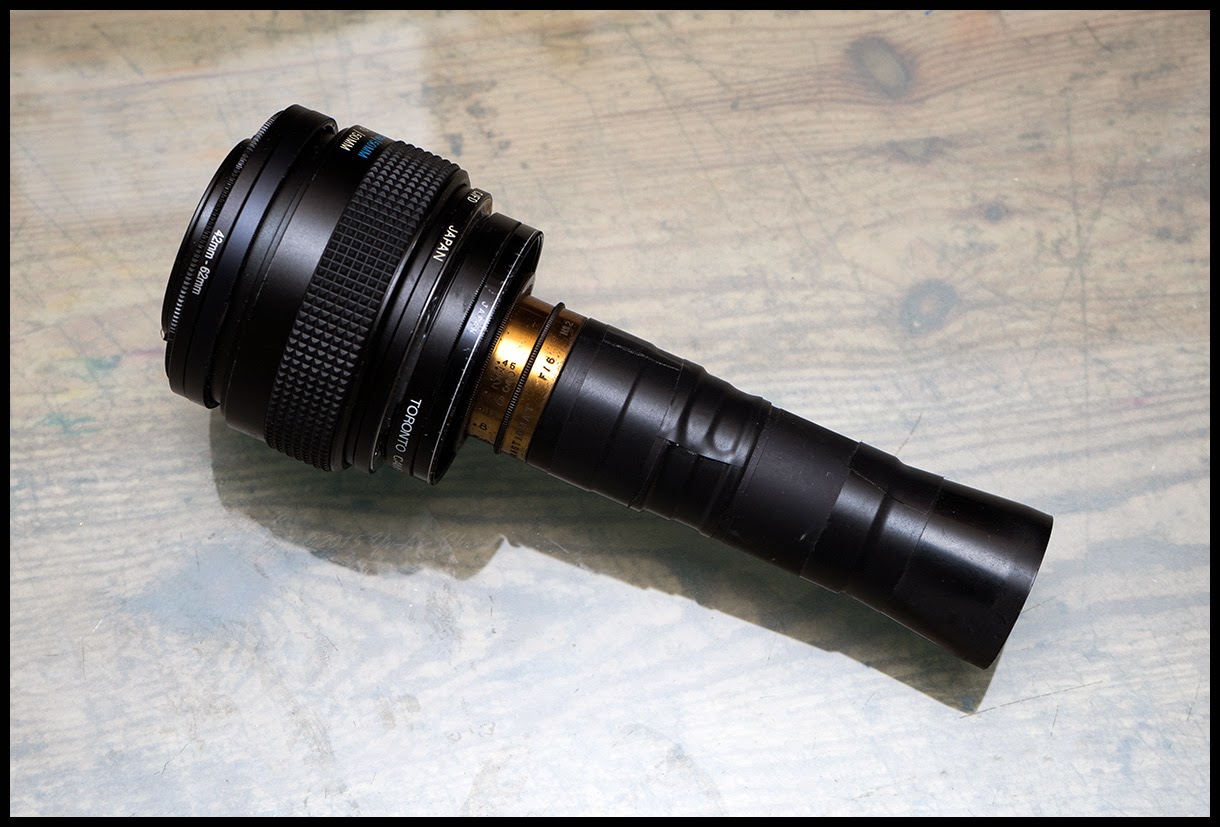 To recap, a hood is a must for old lenses, especially those without any coating. The differences between a picture taken with hood and without hood is like night and day. So, put on a hood, which will make your pictures pop, or shoot the lens naked, and risk unwanted exposure.

Our next, and last installment of this mini-series, we are going to wrap up by mounting a lens with the parts we talked about.
Posted by Lens Bubble at 11:30 PM