Often I buy stuff without even thinking, especially when it's very cheap. That's why I end up with so much junk around the house. At one time I bought a few large/medium format lenses, because they were extremely cheap. Of course I had no use for them at the time. I look at them every once in a while, but today I decided to Google a couple of them that's marked with a name A M and see what they are. One is a 5 inch f4 and the other is an 8 inch f5.6.  To my surprise, these lenses are relatively common. The A M stand for Air Minitry, basically Britain's Air Force. These lenses were used in WW II in air planes to record dog fights or used for surveillance. They were all uncoated. Both of mine have some degree of haze and need to be cleaned.

These lenses were made by the UK lens makers at the time; Dallmeyer, Ross London, Wray, Aldis, etc. Almost all of them have pretty long focal lengths, and the 5 inch f4 is probably the widest lens it used. In large format, 5 inch (roughly 120mm) is actually a wide angle! The 5 inch f4 looks strikingly similar to the Ross  London 5 inch f4. I wouldn't be surprised if they are the same lens.

I haven't tried them yet. The 5 inch f4 seems easy to adapt, so maybe I will try that one first and see how it performs. I won't put too much hope on absolute sharpness/contrast, but I am hoping it will have interesting rendering characteristics. 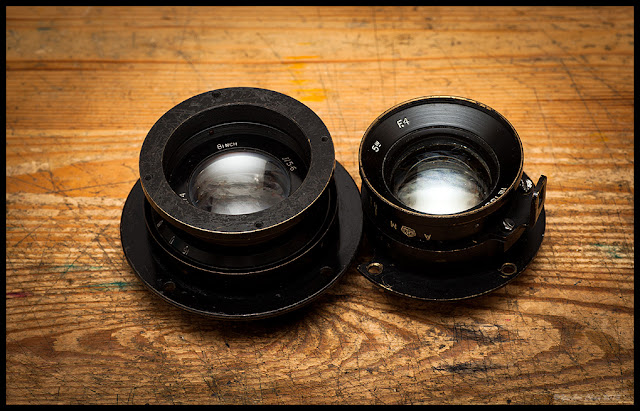