For a die-hard DIY lens fanatic, focus helicoids are indispensable.  I have written a few posts on this subject, and a DIY post on converting the Vivitar 2X Macro Teleconverter to a focus helcioid here. Since then, I have made a few more and I would like to share some thoughts on these.

Some home made helicoids

The Vivitar 2X Macro Teleconverter -- This is by far my favourite and most used focus helicoid. It has good extension at 17mm, and depends on how it's converted, the minimum thickness can be from 35mm (35mm- 52mm) to 52mm (52mm - 69mm) with my own conversions. The smoothness of this helicoid is unmatched by the cheap dedicated helicoid on the market.  Of course, due to its very thick nature, it's not usable on all lenses, but because the opening is large at around 55mm, and the inside diameter of 46mm, quite a few lenses can go through the tube and get very close to the sensor. The Kowa Prominar-16 50mm f1.2 projection lens is one example. This allows the lens to focus extremely close, and yet can achieve infinity focus. I have since acquired a few of these Vivitar converters. Shown below are some examples. 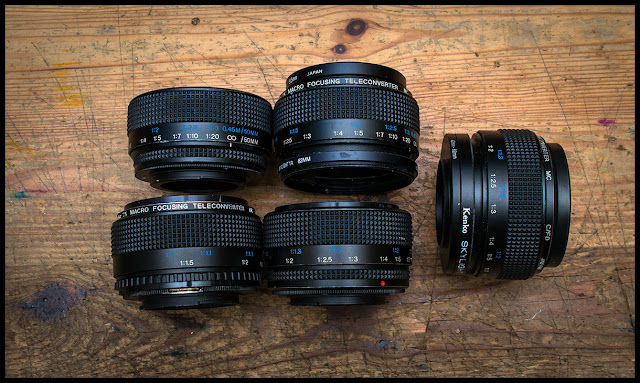 Vivitar 2X Macro Teleconverters in various configurations. Note the top left one is the most recent and the thinnest. These have different openings from M42 to 55mm to accommodate different sized lenses.

No Name 3X Macro Teleconverter -- This is my least liked helicoid. Technically, it's not really a helicoid. Instead, it uses a zooming mechanism and as a result, the smoothness is not quite the same. Another negative is that this helicoid does not extend; it's an internal focus type which limits its usefulness.  Consequently, I rarely use it. Not recommended as a frequently used tool but if you get it for a few dollars, by all means, add it to your tool box. 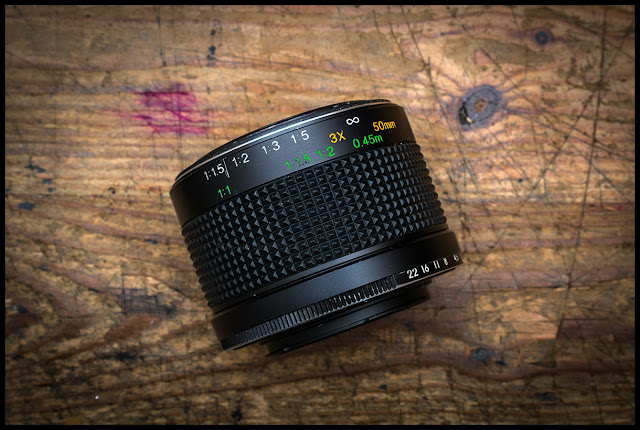 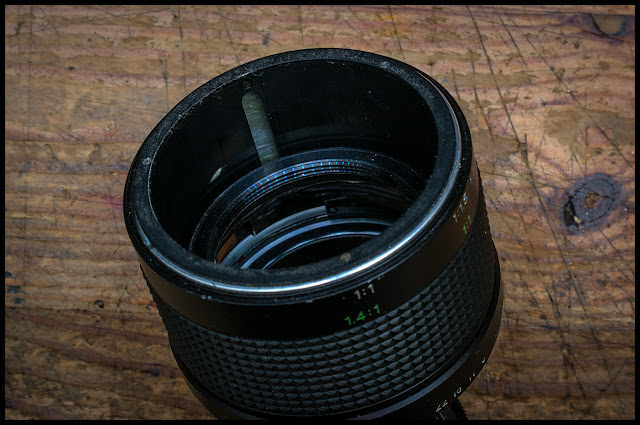 Yashica 50mm f2 -- This one is converted from a Yashica 50mm f2 lens. The kit lens that came with the Yashica FX and other entry level cameras. I have had a few of them and I have one converted just to see what it can do, and I like it quite a bit. The focus is very smooth, with a 52mm opening and relatively thin at 29mm when retracted. The extension is 7mm, is is a good compromise. So this one is 29mm-36mm helicoid. This is a good lens to use as a carrier for enlarging lenses. I originally planned to use it permanently for the Dallmeyer 50mm f3.5 enlarging lens, but I saw that it can be used as a general purpose helicoid, so I will be doing another one for the Dallmeyer lens in the future.

I modified the opening of the helicoid to accept both 52mm and M42 threads. Picture #2 below has more details. 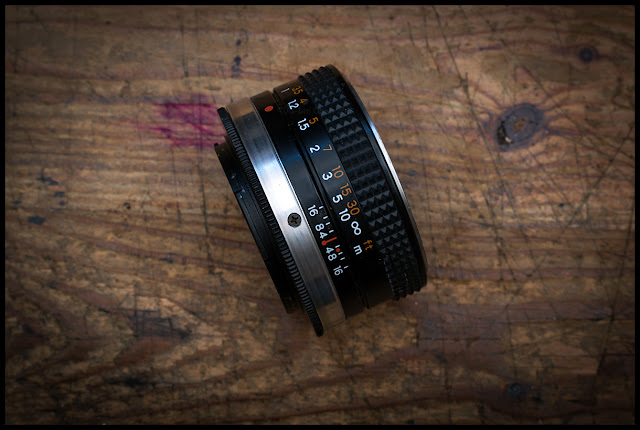 Here you can see I have started to use screws to secure the mount in place. Sometime it works out really well, like in this case, but most of the time, it's nightmarish to get the holes aligned. 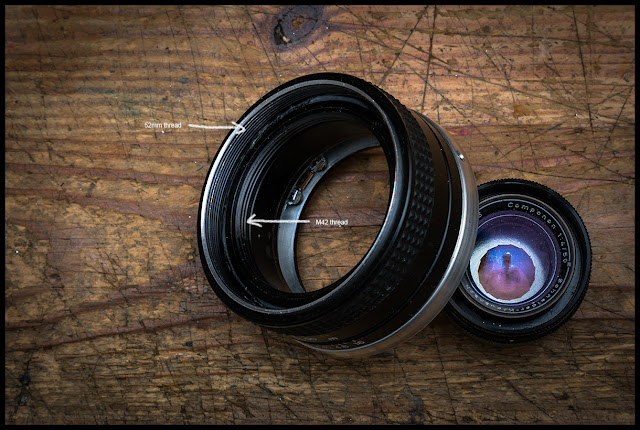 This helicoid can take either 52mm or 42mm lenses. The 42mm thread is 5mm deeper into the helicoid and therefore won't accommodate all lenses, but for smaller lenses, this makes for, roughly, a 24mm-31mm helicoid.

Hanimex 28mm f2.8 -- I really like this one as it's so smooth in focusing, and it's the thinnest home made helicoid at 25mm. The extension is only 5mm so it's a bit of a disappointment. It won't allow very lose focusing, unless the lens used already has its own focus mechanism. Currently, the opening is 49mm as I have not modified it. Eventually it will have an M42 opening. The inside diameter of the helicoid is quite small at 36mm. This one is brand new and not yet used to take pictures yet. 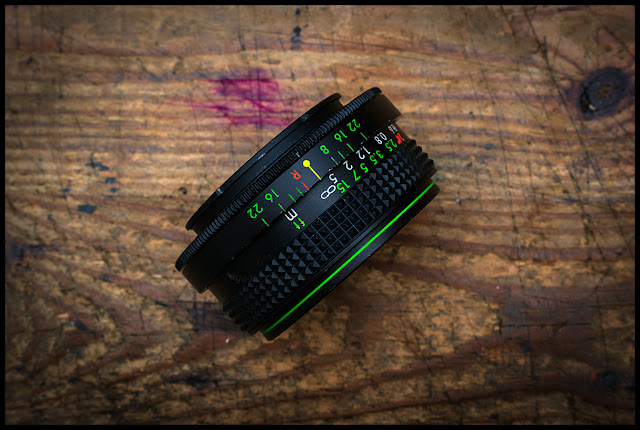 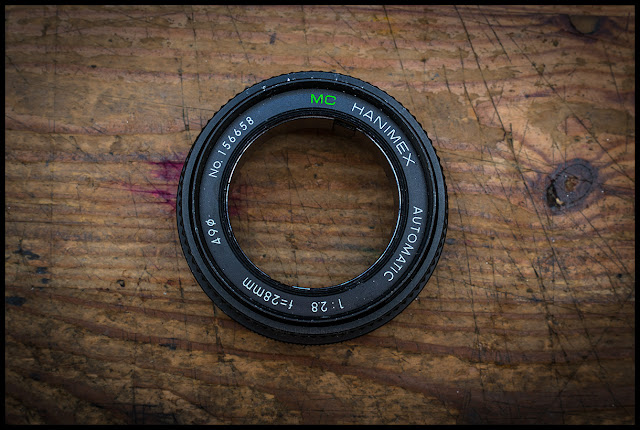 Working on -- These two are being worked on. On the left is a Pentax-M 50mm f2 with glass already removed and ready for conversion. On the right is another Yashica 50mm f2 and it will have an M42 mount at the rear. This lens was taken apart years ago and I need to find the rest of the parts, especially the focus ring, otherwise I will have to make it myself. 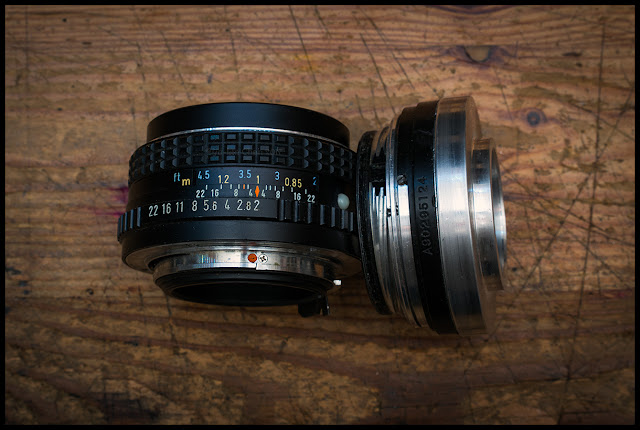 In the queue for conversion.

To recap. Focus helicoid from lenses are a compromise. Most have very short focus travel (extension), and therefore won't allow very close focus, but the smoothness of them is their most alluring quality, which really adds to the enjoy of taking pictures.